A couple of days ago, the Nova Scotia Museum in Halifax, which holds most of the  surviving artifacts of the ill-fated RMS Titanic,  recreated the morse code radio distress messages as “real time” Tweets, exact minute by minute, almost a century later. 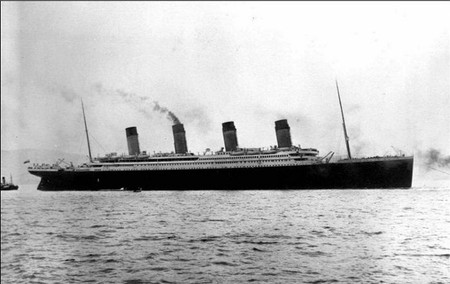 The museum’s idea was certainly an imaginative way of using Twitter in 2011.

The event has three lessons  on the future of news.

Second while  a news organization might have had the idea to do something  similar, using the files in its morgue (that is if the beancounters haven’t discarded the archive or donated it for tax reasons to a local library or  university), it was the museum that created this Twitter event,  That shows again that news organizations are in stiff competition, not only with other news media and the bloggers and social media but with any organization with the imagination to  do something about a news pegged historic event.

Third, this was a great news and social media story that the news media didn’t pick up.  The only story I saw was an advancer from CBC.ca that I saw after the fact and so I missed the tweets.  The reaction to those who know about the Tweets and retweeted or commented to #ns_mma or  #Titanic were very engaged in the real time story.  The media missed this one,.

I am one  of those who has always been fascinated by the Titanic story, going back to the first time I saw A Night to Remember on television as a small child (and for some reason, that I was never able to track down, the Titanic story always made my mother very upset. She was born in 1914, two years after the sinking, so there may have been some sort of connection)

So I went to Twitter and captured the recreation of the sinking of the Titanic. Here are the tweets in reverse chronological order.   Larger versions will pop up on a click) 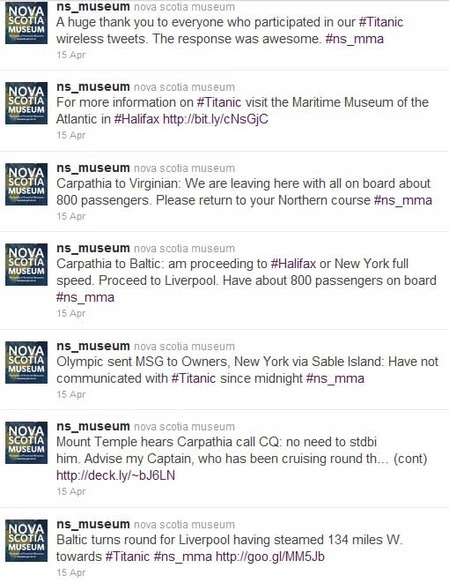 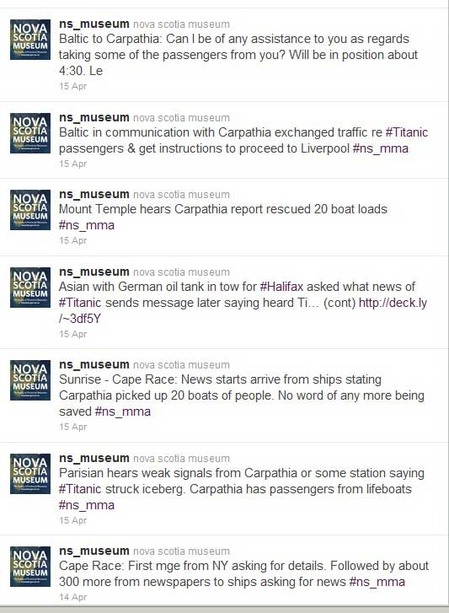 In this sequence, about half way down, the news media becomes aware of the sinking and starts asking the overworked radio operators at Cape Race in Newfoundland for details. 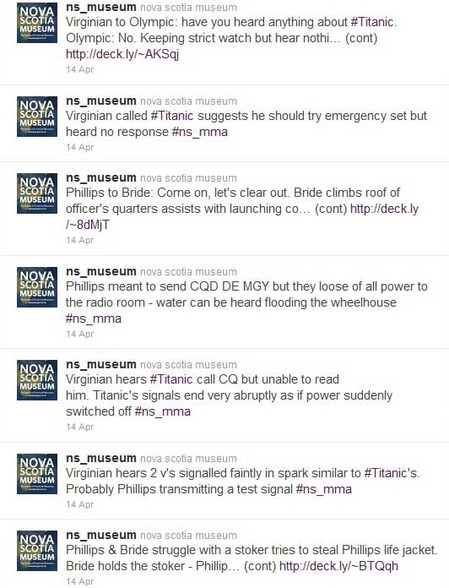 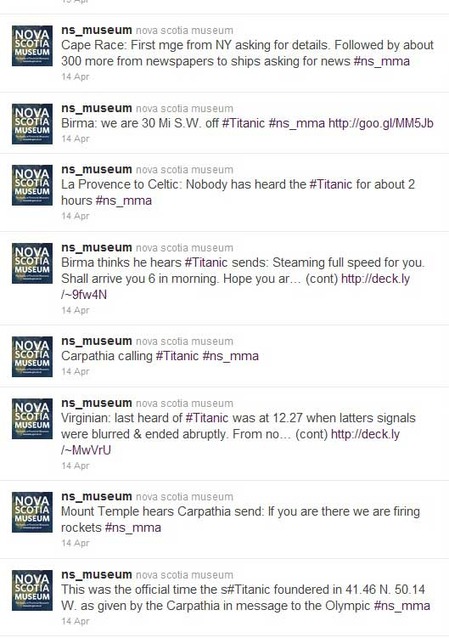 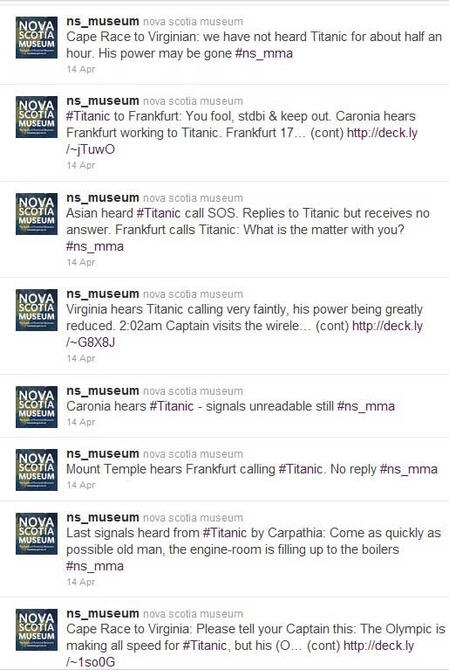 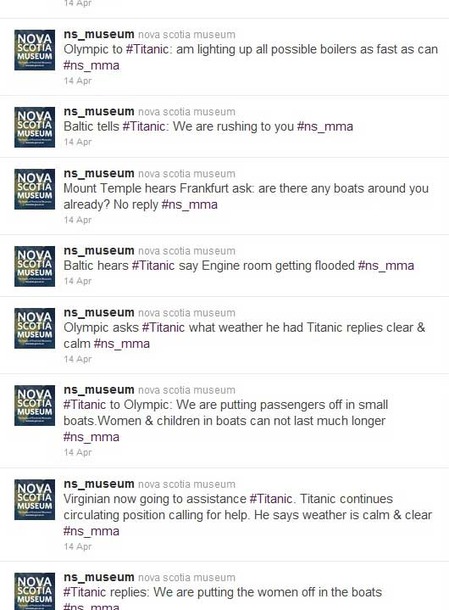 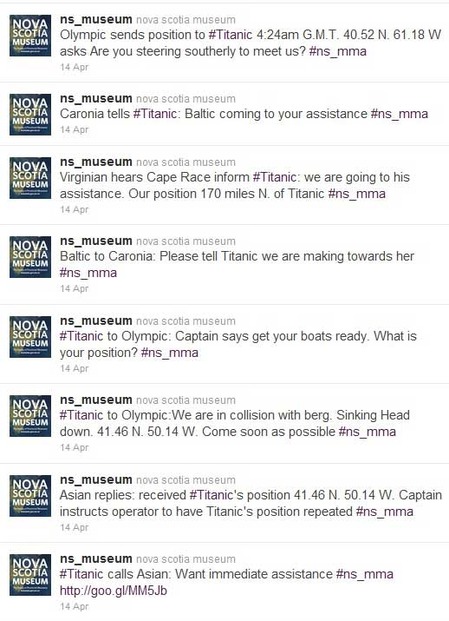 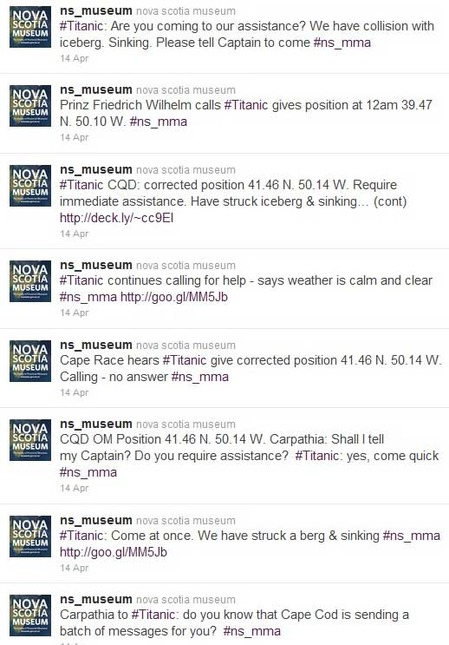 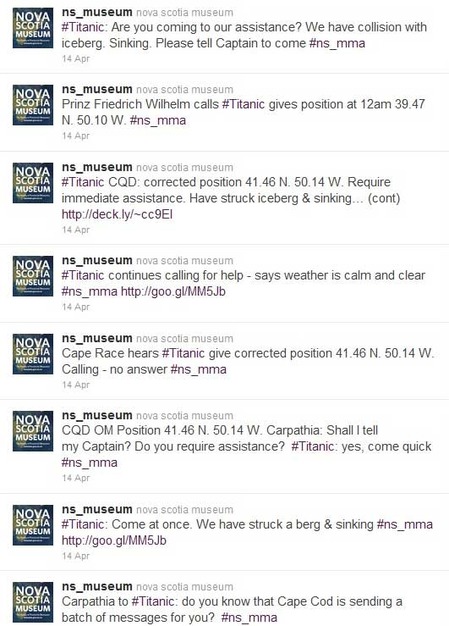 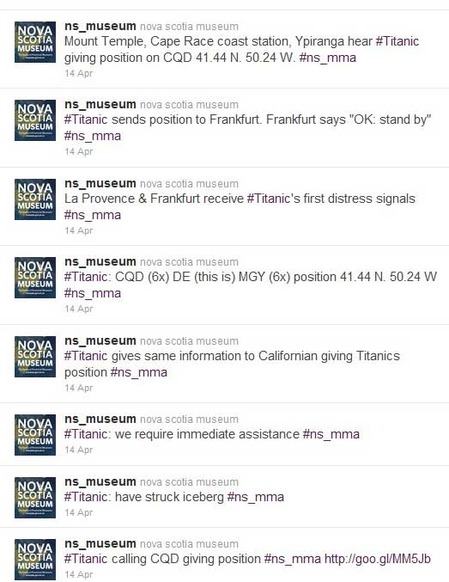 One last note, During the CBC lockout, I wrote a blog about the Titanic’s musicians and how badly they were treated by the White Star Line,. See  On Contract on RMS Titanic

UPDATE  Jeff Jarvis has written a broadside about the media and business plans,  Hard Economic lesson for news.  I don’t agree with all of what Jarvis says, it is probable that too much of an emphasis on economics is what got the news media in trouble long before the Internet, But Jarvis does say:

* There is huge growth potential in increasing engagement.
Facebook gets roughly 30 times the engagement of newspaper sites,
Huffington Post’s engagement is also a multiple of newspapers’. If we
are truly community services, then we must rethink our relationship with
the public, becoming more a platform for our communities, and that will
multiply engagement and, with it, audience, traffic, and data. We have
not begun to extend and exploit the full potential of the value news
organizations can have in relationships with their communities: more
people, more value, more engagement equals more value to extract.

The Nova Scotia Museum’s Titanic recreation is one example, as I said, where imagination does create reader/audience engagement.

The news media, however, following tired standard operating procedures and so the news media failed. In this case,. following and reporting on this story would have cost just pennies and increased reader engagement on a news story that has fascinated for 99 years.